Thoughts on US Open

Over the past few weeks, leading up to the U.S. Open, I've been increasingly asked about the new look of Pinehurst #2.  In general, reactions to the changes that have taken place are mixed at best.  It seems that you either love it or hate it.  I for one love it.  For a long time, I've lamented the perfect, verdent conditions our member,s and guests, see on TV each weekend.  While I'm sure none of them expect the same conditions at our facility, given our resources, it's impact on our industry is not lost on me.  For decades, golf course conditions on TV have influenced general opinion in this country about what a good golf course should look like.  This is typically referred to as the Augusta Syndrome.  The USGA, to their credit, has had sustainability and water conservation at the forefront of their efforts for several years now and it seems coordinating back to back mens and womens U.S Opens this year at Pinehurst, and next years Men's U.S. Open at Chambers Bay, is no accident.  It seems they indend to put firm, fast, and brown courses in front of the masses in hopes of curbbing public opinion.  Will it work?  I hope so.  My biggest hope is that by watching these tournaments, the average golfer will realize that courses don't have to be lush and green to be considered good.  Using a little less water and fertilizer is not only cheaper, it's better for the environment, and playability is often improved.  Drives roll farther, and greens roll faster.

Now, I realize that not all facilities are going to be able to do what Pinehurst has done, but I believe they must take steps, however small, to reduce their footprint and cut costs.  I think that the ability of any golf course to reduce its inputs depends on it's geography, design, and whether or not they have grasses that are adapted to the area.  Courses in the transition zone with cool-season tees, fairways, and rough, are going to have a very tough time reducing water usage, and other inputs, without losing grass.  Courses like Pinehurst and Chambers Bay, contain grasses that are acclimated for their locations and can withstand a fair amount of environmental stress without dying.

Here at Bailey Ranch, we've always been strigent with our inputs.  We rely exclusively on stormwater runoff which forces us to use water sparingly, and limited coverage with our irrigation system causes the turf in the fairways and rough to turn dormant.  The membership has been very accepting of this due to the increase in ball roll in fairways and thinner lies in the rough.  Also, the drier conditions fit nicely into the links design aesthetic of the course.  Over the past few years, our department has converted 10 acres of maintained rough without irrigation coverage to native areas to help further reduce inputs and increase native habitat.

Many colleagues at courses similar to us will be able to say they're doing, or not doing, the same things that we are, mostly due to budget constraints, but my point is that its nice to finally see a course on TV that isn't perfectly manicured from edge to edge.  Even if their budget is still 2-3 times ours.  It's important for the future of the game that water conservation, and sustainability, not just be talked about, but put on display for the public to see and get comfortable with.

In February, the grounds staff, cooperating with the Oklahoma Bluebird Society, constructed and installed Bluebird boxes in select areas around the golf course.  During the initial stages of this project, we quickly learned that there was a lot we didn't know.  The boxes were constructed and redesigned several times to ensure the birds would use them, and that other animals, such as snakes, squirrels, and other bird species, couldn't interfere.

Throughout spring, we began to see an increase in bird activity near the boxes, but hadn't seen evidence of nesting.  Over the past few weeks, we've noticed some nesting building.  I peeked into the box near #10 tee and saw a large nest containing eggs and what appears to a hatchling.  Incubation is only 12-14 days from the time they are laid to when they hatch.  Once they hatch, it takes only 19 days until they can fly from the nest.  The old nest material will be removed once the young are fledged from the nest.  Bluebirds can have 2-3 families each year and a new nest will be build each time.

I am very excited to have this much activity in our nests in our first year.  I hope that each year, the population grows, and we can incorporate more boxes throughout the property for everyone to enjoy. 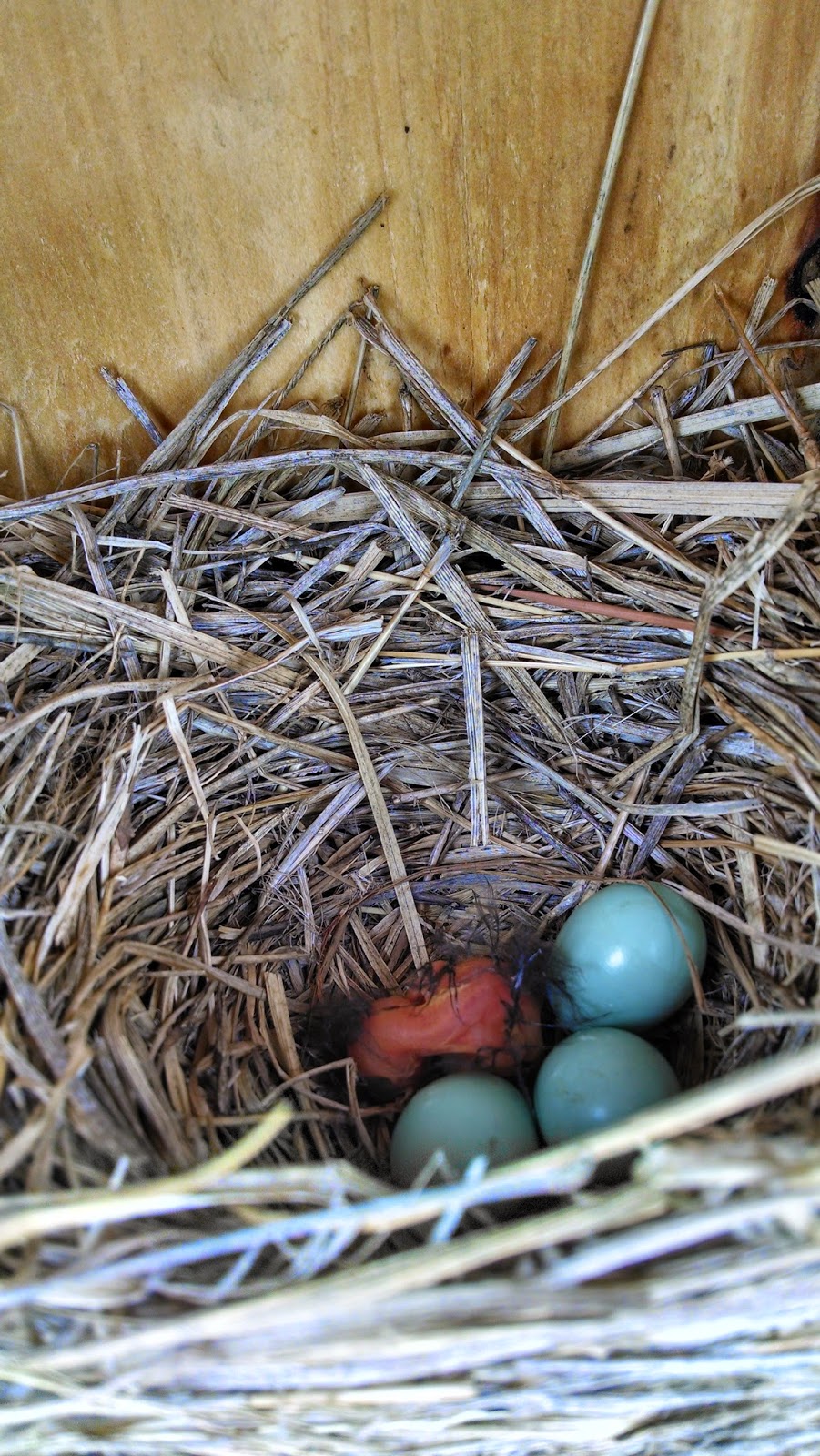 Course Update for May

May is typically a transitional month where the cool nights and days of spring give way to the warmer weather of summer.  Although delayed, this May proved to be no exception.  The first three weeks of May were anything but ideal weather for Bermuda growth.  Cool nights, cloudy days and lack of rain, had our Bermuda on "stand-by" waiting for summer come along.  Then all of the sudden, the pattern changed drastically with day temps in the high 80's to low 90's, and abundant rainfall.  If you include the rain from last Monday morning, we've had enough rain in the past seven days to double our annual rainfall total.
May is also a time full of transitions operationally.  Seasonal staff have been brought in to begin mowing schedules as well as cultural programs such as verticutting, slicing, and topdressing.  Douglas Knapp, our chemical applicator, is going full throttle keeping up with all our fertilizer, and pesticide applications.  Joe Miller, our irrigation technician, is busy maintaining our irrigation system.  Lastly, with more equipment leaving the shop each day, Mitchell Pierce, our equipment manager, has to spend most of his time adjusting and sharpening mowing equipment.
Despite a slow start to the month, I feel that all the work completed by our dedicated staff, coupled with favorable weather, caused the course to peak right before Memorial Day weekend.  June is starting out with great conditions on the course and should be a great month for golf!

Posted by Chris Cook at 9:27 AM No comments: