What's Going On With Our Fairways?

Some of you who've played the golf course within the past few weeks might be wondering what is going on with our fairways.  As you can see from the picture above, much of the Bermuda in the fairway is thin and is not filling in very well, while other portions of the fairways seem to be doing fine.  While there are several factors that have caused the fairways to look like this, a fungal disease has stuck out as the leading cause for the damage.

April is always a time of transition, usually the Bermuda begins to wake up around the first of the month and then spends the rest of the month filling in until the grass achieves full density by May 1st.  The grass can appear patchy and uneven during this time and little thought was given to the look of the course.  By all accounts, we felt the course was greening up as expected.  However, the weather in April thus far, has not cooperated and has been unfavorable to the Bermuda.  According to the National Weather Service in Tulsa, since April 1st, we've only had 2 days without any cloud cover and 50% of the month has been under complete cloud cover.  During that same time, it rained 14 days out of the 23 days thus far in April for a total of 3.26".  This combination of constant cloud cover and excessive soil moisture has left the Bermuda on the golf course very susceptible to disease.  Around April 14th, we started to notice that the fairways were not filling in like we'd expected and that something was wrong.  We were puzzled that the fairway would be affected but not the adjacent rough.  I began to suspect winter injury because the rough height Bermuda is much taller than the fairway and therefore more cold tolerant.  However, after closer inspection, I realized the lesions (fungal infections) on the leaves and realized we have a fungus called Leaf Spot.  Leaf spot is also called Melting Out, due to the visual symptom left behind of the grass loosing density and seemingly melting down into the soil.  Leaf spot is very common on susceptible Bermudagrasses such as the type that make up the majority of our fairways.  Especially during a wet, cool, cloudy spring while the plant is trying to wake up from dormancy.  All the fungus needs is an entry point, which we unwittingly provide every time we mow.  It seems that the mowing equipment has also spread the disease throughout the fairways.  This could explain why the rough is unaffected, since we haven't mowed fairways yet.  It also explains why some areas of Bermuda seem unaffected next to severely affected areas.  This is due to our fairways containing various types of Bermudagrasses and their genetic tolerances to various pests.  Some Bermuda strains are simply more tolerant to Leaf spot than others.

So what do we do about it?  We cannot control the weather, so we must be patient until the warmer, drier weather begins.  This will naturally turn the advantage back to the Bermuda and the grass should recover quickly.  There are several chemical options that could be used, but we do not have a budget for fungicides on fairways (25 acres).  Since we'd be looking at almost $3,000 for just one treatment, we must be objective and decide if the cost is worth the benefits.  Next week, we have a previously planned course wide fertilizer application scheduled.  This fertilizer coupled with some warm, sunny weather could potentially do more for our fairways than a fungicide application.  It will all depend on the weather.  If we continue to have this kind of weather, we may not have a choice but to remove the disease pressure using fungicides.

Please be assured that the grounds staff is monitoring the issue closely and that every step will be taken so that the course can be in the best condition as possible.  If you have any questions regarding the fairways, or any other issue at the course, please feel free to contact us.  Thank you.


On Monday, the grounds staff began work on a drainage issue in front of #14 green in the middle of the approach.  The drainage system underneath #14 green exits to the southwest through the approach and goes downhill towards the cart path.  We recently discovered a persistent wet spot right in the middle of the approach, and knowing the drainage is in the vicinity, knew we needed to at least take a look to see what's going on.  The staff dug up the wet spot and found a pocket of saturated greens mix but no pipe.  This spot is about ten feet left of where the drainage system is located.  This means that some of the water inside the green cannot quite make it to the pipe and has collected in a second low spot to the left.  Once enough water collects there, the water "tops" over the clay edge into the sand layer above.  The water then moves inside the sand until it can surface through the turf.  This is where the wet spot came from in the approach.  Our solutions was to create a drainage extension to give the water in that second low area somewhere to go so it will stay underground.  This should keep the turf in the approach from getting saturated.  Although we had a tournament on Monday afternoon and another one Tuesday morning, the staff did a great job getting this project completed as soon as they could.  The area is all put back together and we apologize for any inconvenience this project may have caused.

If you've been on the putting green lately you've likely noticed the blotchy yellow color throughout the green.  This is annual bluegrass, or Poa annua, that has been treated with a growth regulator as part a control program aimed at reducing the Poa annua contamination in our greens.  Generally, as greens age, contamination from Poa  becomes more prevalent.  This is especially true on greens that receive heavy foot traffic and have a history of excessive soil moisture.  Poa tends to grow faster than Bentgrass throughout the day and therefore greens with excessive amounts of Poa will get bumpy and slow as the day progresses.  This chemical won't kill the Poa, it just stunts the growth and allows the Bentgrass to better compete for water and nutrients.  I realize this green doesn't look very good during this process, but hopefully, an increase in putting quality will make up for it.

As summer approaches, we will back off the chemical control and let the summer heat continue to discourage the Poa.  Then, when fall approaches and the temperatures cool off, we'll start up the program again.  Antagonizing the Poa throughout the growing season, is our best defense until other control options are developed.  If you have any questions regarding our Poa control program, please feel free to ask.  Thanks 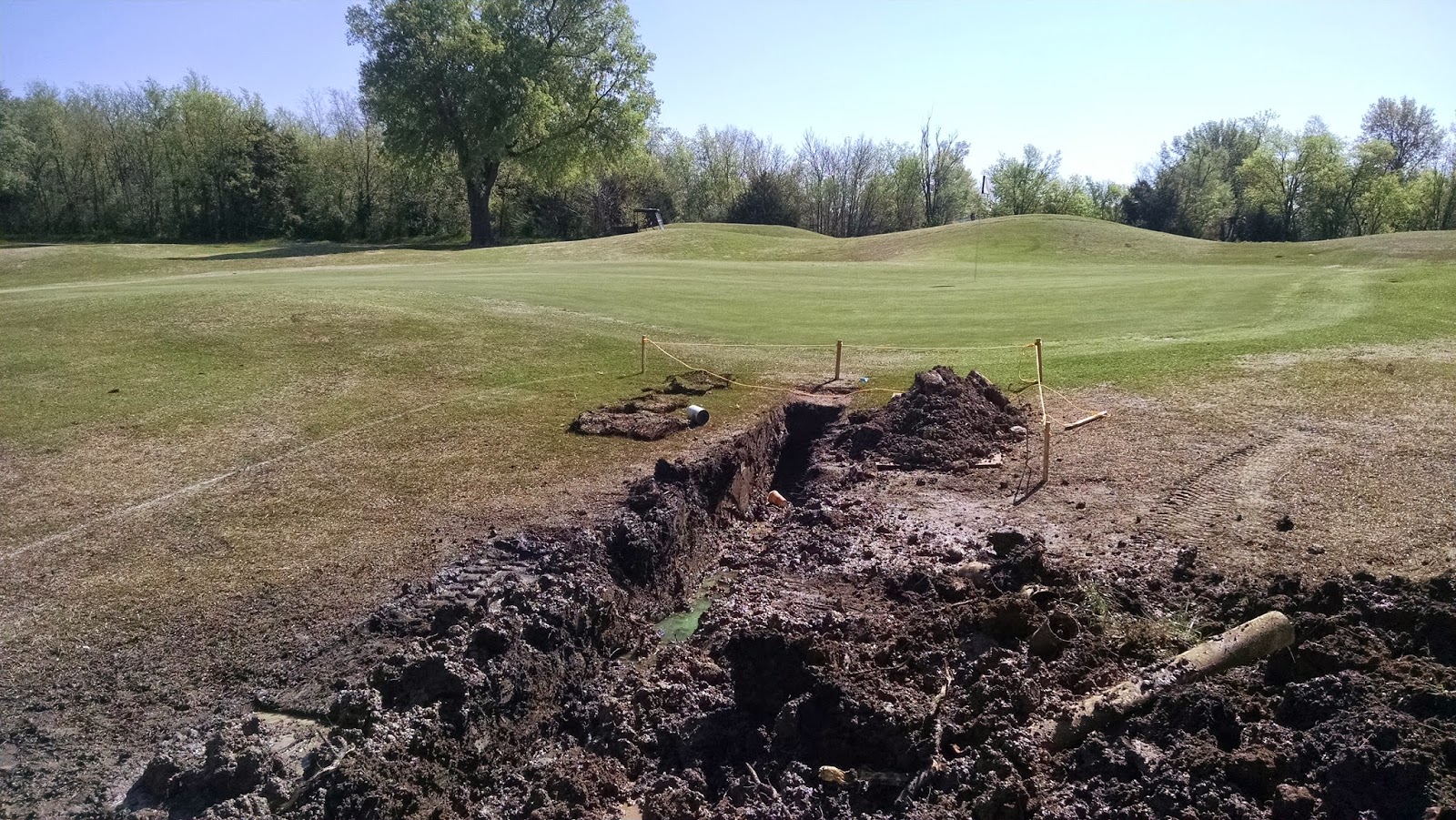 Please excuse the mess on the right side of #12 green as you play through this weekend.  It was discovered a few days ago that the drainage coming out of #12 green was plugged up.  Staff will be replacing the plugged drain line today and should have the area leveled off before the end of the day.  However, the work site will not be sodded before the weekend.  Ground under repair markings are in place to clarify the work site.  Please use caution when retrieving golf balls within the area.  Thank you for your patience while our staff works in this area.
Posted by Chris Cook at 3:12 PM No comments: