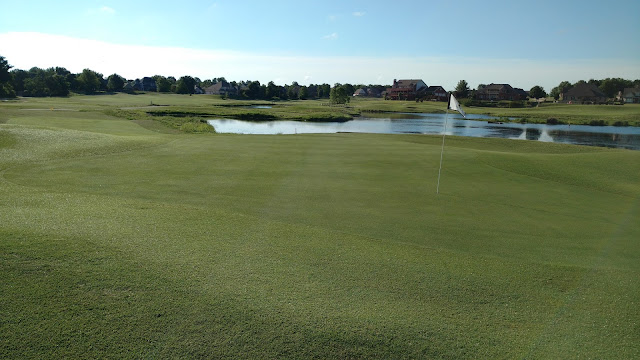 Memorial Day weekend has come and gone.  The weather was perfect all weekend and the golf course was packed with hundreds of people enjoying themselves.  Based on the feedback I recieved over the weekend from golfers, the condition of the greens surpassed expectations.  It was nice to be validated and that all the hard work the staff has put into the golf course over the past few weeks has been noticed.  With the busy holiday weekend behind us, our focus switches to cultural practices on greens to ensure they stay firm and healthy through the summer months. 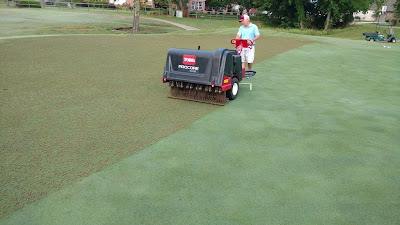 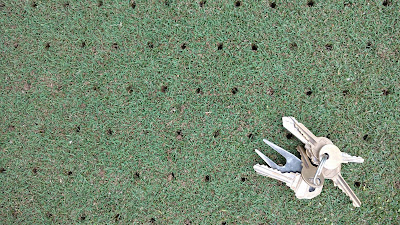 With this in mind, the grounds staff is performing a core aeration on greens.  Don't be alarmed, the tines we are using are very small and the debris created is easily cleaned up.  Once the green has been cored, a thin layer of sand is incorporated into the holes.  As you can see from the picture at the bottom right, the surface is very playable immediately after the process.

This coring physically removes the troublesome thatch and allows the topdressing sand someplace to go.  The improved oxygen content and reduction in surface compaction should allow the Bentgrass to be as healthy as possible leading into another hot Oklahoma summer. 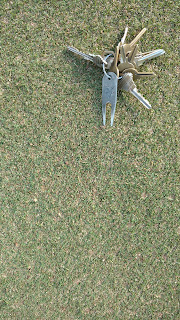 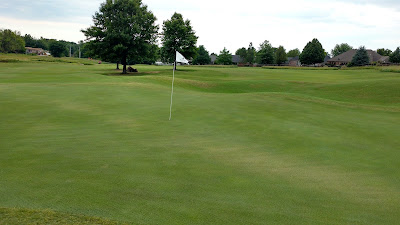 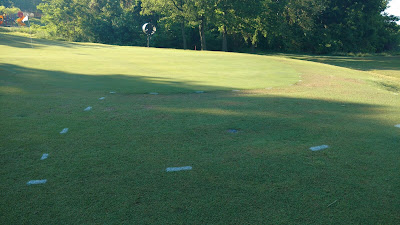 This week, the grounds staff added new sod to a few miscellanous areas in the green surrounds on #2, #3, #10, #12 and #13.  A few of these areas came out of winter a little too thin and some of these areas were not level and needed redone.  One spot in particular, the area behind #3 green, had numerous sunken spots from years of gopher damage.

Similar to previous sod projects, these areas will be marked ground under repair and we ask that everyone stay off the sod for the next few weeks.  Once the sod is rooted in, the soil underneath will stabilize and the sod will be ready for foot traffic.  After the sod gets established and starts to grow, the staff will begin lowering the height of cut down to it's eventual .4" cutting height. 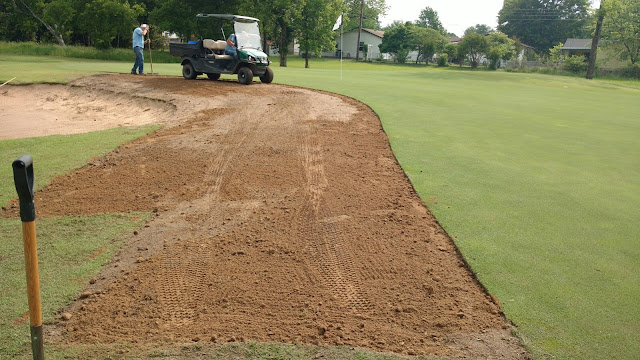 Posted by Chris Cook at 2:39 PM No comments: 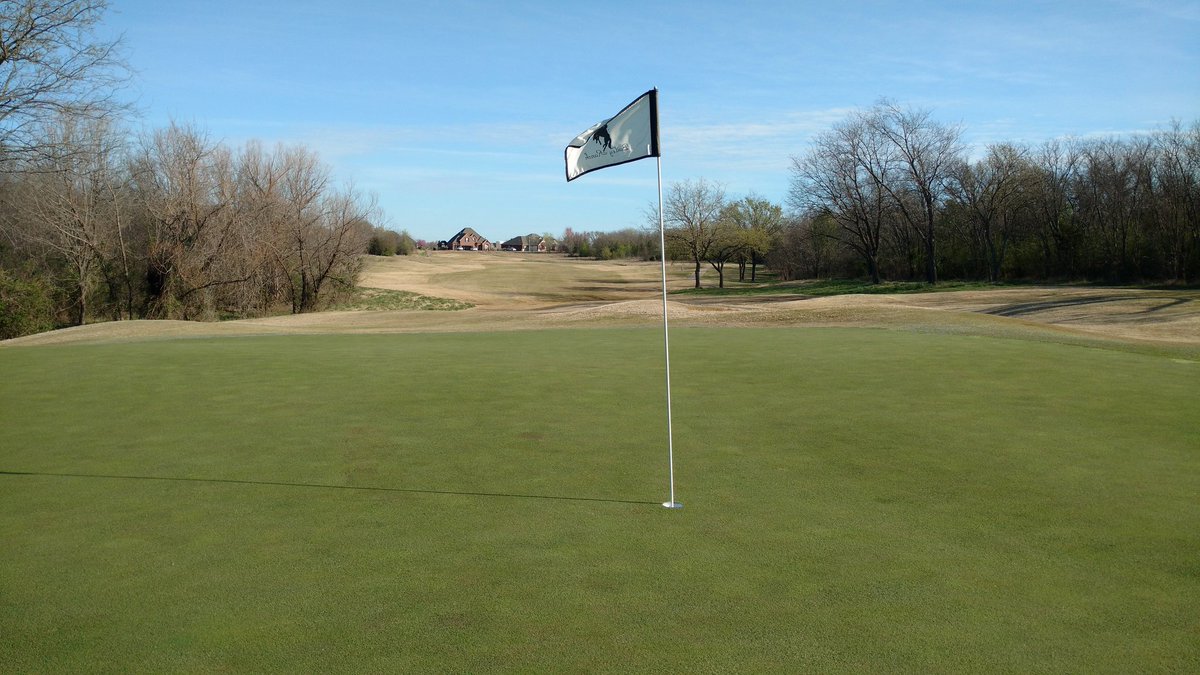 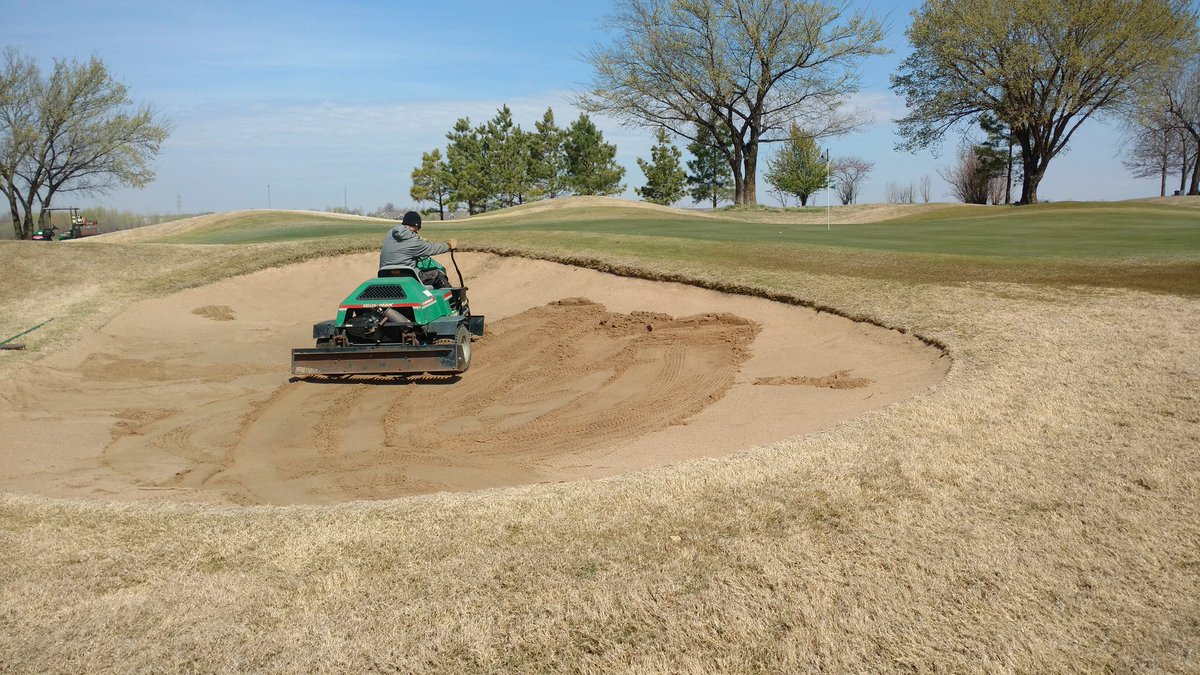 March and April are always exciting months for the Grounds Department.  We begin hiring and training seasonal staff, the weather begins to warm up, and the golf course begins to wake up from its winter slumber.  This year, the weather has been somewhat upside down.  March started out warm and dry and April ended up being cooler with a considerable amount of rain.  The picture above was taken during early March and you can see the weather caused the Bermuda to green up very early in the season.  During this time, certain maintenance activities are done to prepare the golf course for the season.  In mid-March, the staff completed our annual bunker audit.  This is done each spring, before the golf season kicks off, to ensure the sand depth in each bunker is within specifications.  Keeping the bunker sand depth consistent creates consistent playing conditions from one bunker to the next.  The staff also completed our first greens fertilizer application one week prior to greens aeration.  We've found that applying Nitrogen before aeration always does a good job of waking the Bentgrass from dormancy and forces it to grow aggressively.  The aggressive growth is key to a fast recovery from core aeration. Greens aeration was completed during the third week of March, right after the Rogers State Invitational.  As usual, the staff did an amazing job and the greens were aerated ahead of schedule and the finished product turned out great.  The weather in mid-March was very mild, almost hot, with a record 92 degrees on March 20th.  This hot weather caused our Bermuda to jump out of dormancy quickly and the tees, fairways and surrounds greened up considerably over the second half of March.  As March came to a close, we were pretty pleased with where the condition of the golf course was.  The picture below and to the left was taken mid-March and the picture to the right was 14 days later. 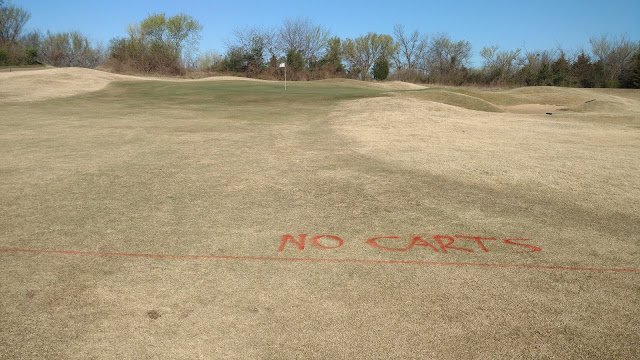 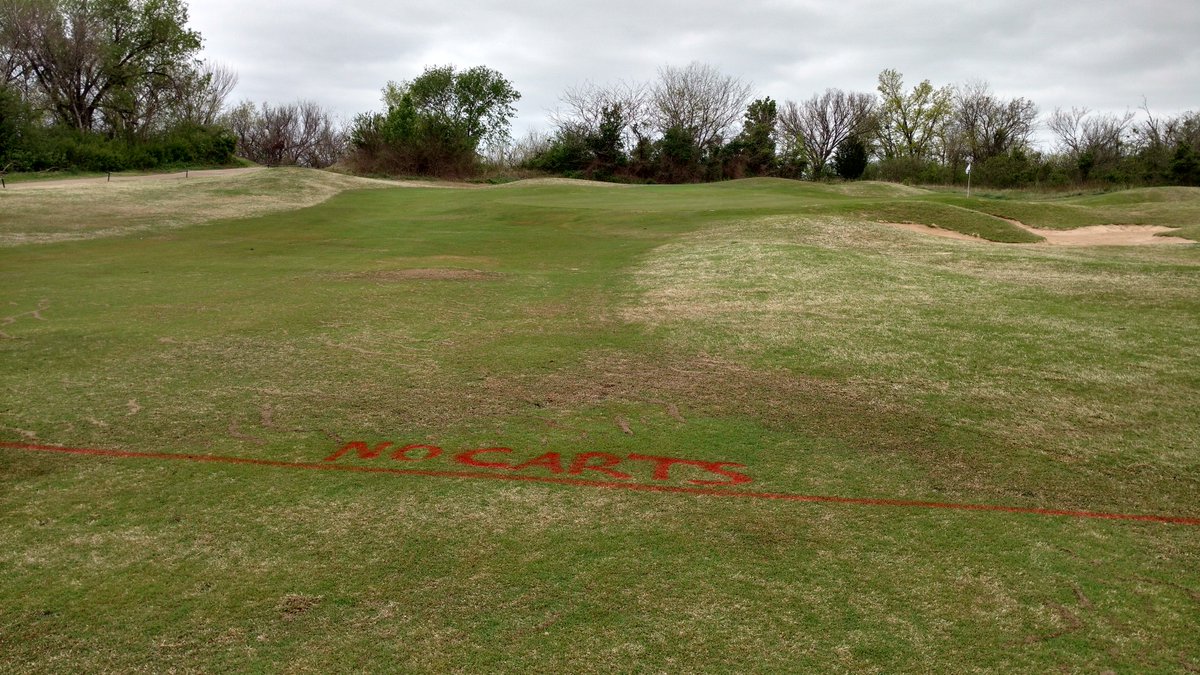 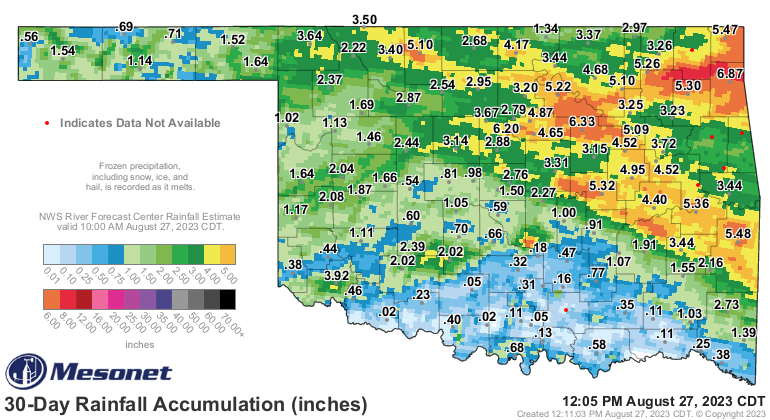 The weather in early April was similar to the end of March.  Then the spring rain season began and the temperature dropped.  Over the past several weeks, the golf course has received over 10 inches of rain.  The cloudy, cool weather coupled with this much rain has had a negative impact on our Bermuda.  The turf quality throughout the course actually decreased in April compared to March.  Recently, we've seen some moderate amounts of disease on portions of our fairways that are a direct result from the amount of rain we've received.  This disease is more of a nuisance than anything, but does temporarily affect the quality of our fairways until the plant can recover when warm, drier weather sets in.  You can see in this picture of #10 fairway that the improved Bermuda in the foreground is unaffected and healthy, while the common Bermuda uphill has been thinned out due to the disease.  The pictures below give a closer look of both grasses.  This seems to happen every spring, to some degree, and isn't a cause for concern, especially since the weather looks like it will turn warmer and drier starting next week.  Once some warm weather, and sunlight, hit the Bermuda, it should recover quickly over the next few weeks. 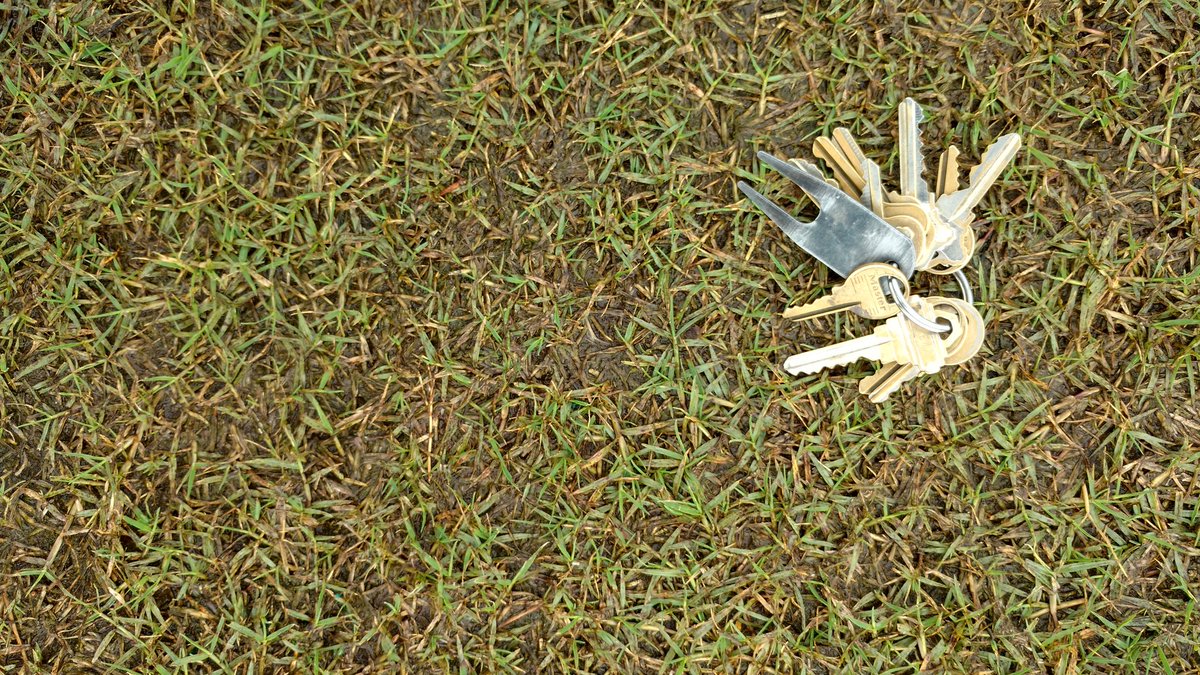 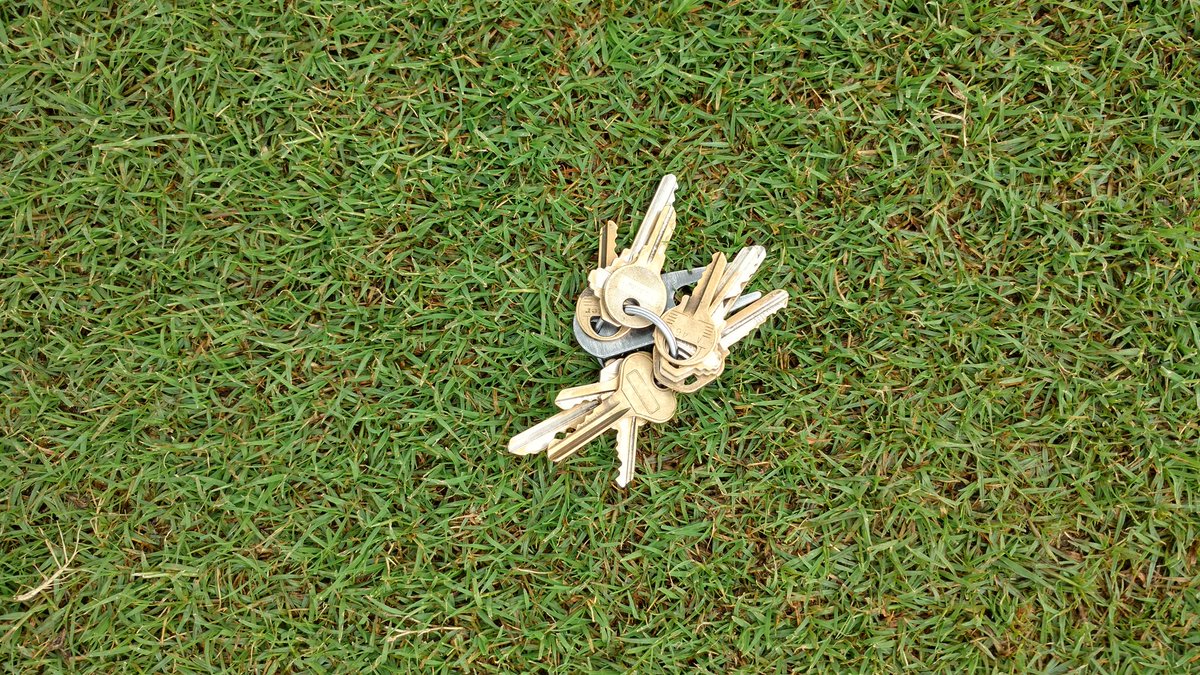 Maintaining the bunkers has been a challenge over the past few weeks.  Any rainfall event over .75" causes our bunkers to wash out and our staff has to spend the next day putting them back together.  You can see, from the picture to the right, what happens when we get several inches of rain at once.  This requires a lot of shoveling and raking to get them back into acceptable condition.  I'm very proud of our staff for showing the diligence and resiliency needed to keep up with these bunkers during this time of year.  Through out this rainy few weeks, the bunkers have been in great shape and are a testament to their hard work. 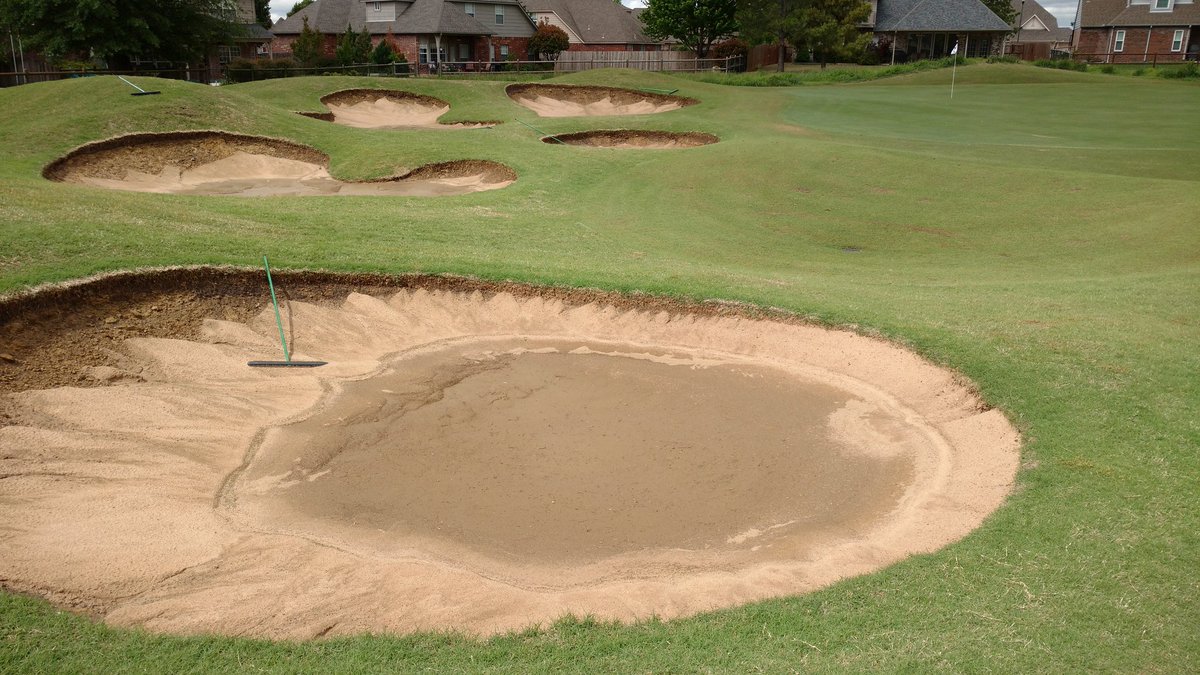 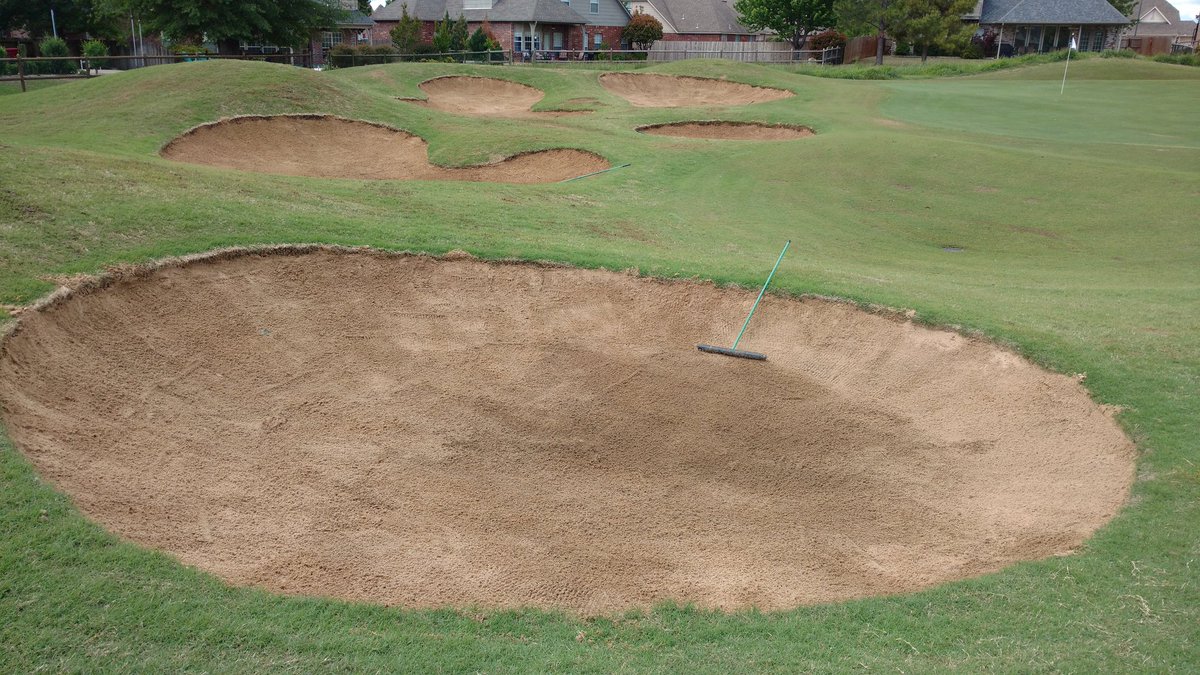 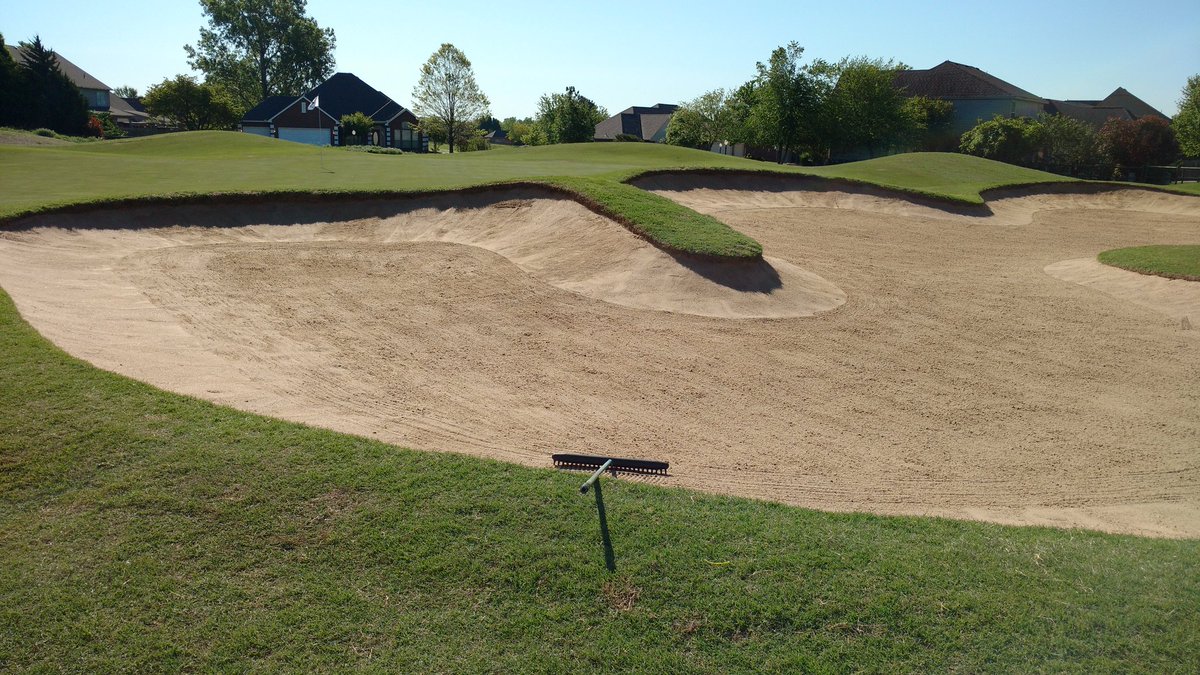 Lastly, you may or may not notice, as you drive the cart paths during your next round, but the staff spent some time last week grinding some of the high spots out of the cart paths.  Over the years, as soil moves, some of the cart path cracks had raised up and have caused a rough ride.  Grinding off these high spots proved to be a cost effective way to solve this problem.  Wrangling these machines all day for two days was a lot of work and the staff did a great job getting the project done. 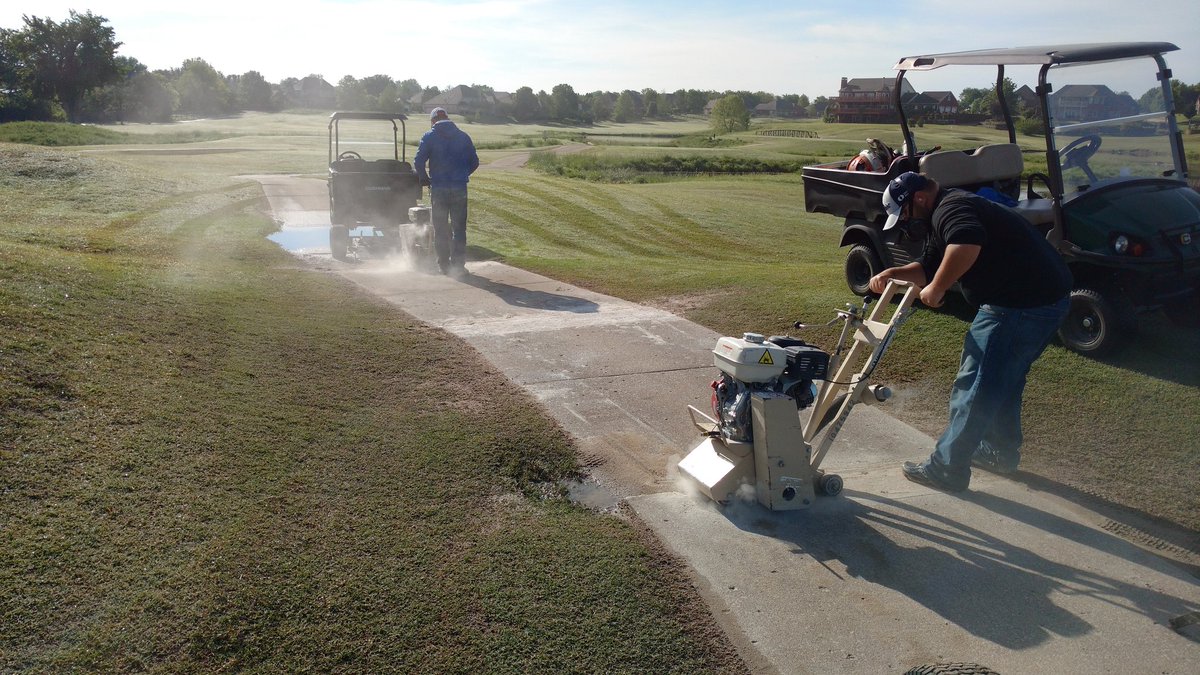 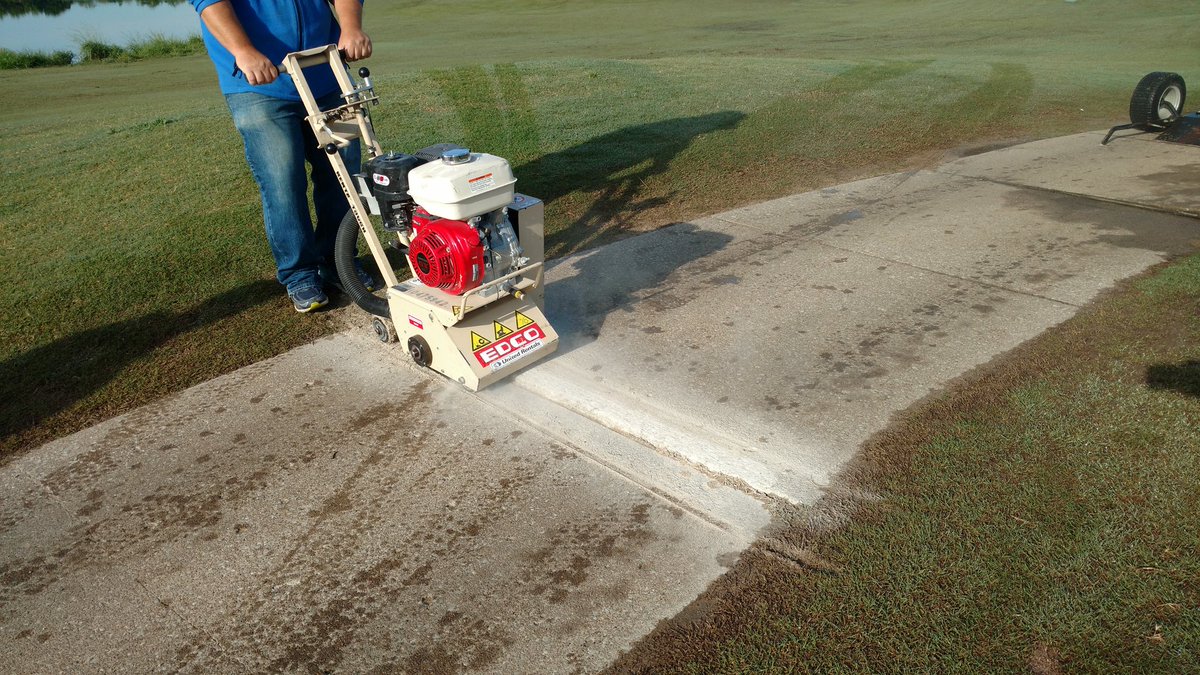 It appears that the unstable weather pattern may be breaking down, which should allow the staff to get into a bit of a rhythm regarding routine weekly maintenance such as mowing and other activities.  As the Bermuda begins active growth in May, the condition of the golf course will improve and we are excited to begin a busy summer season!  See you on the course! 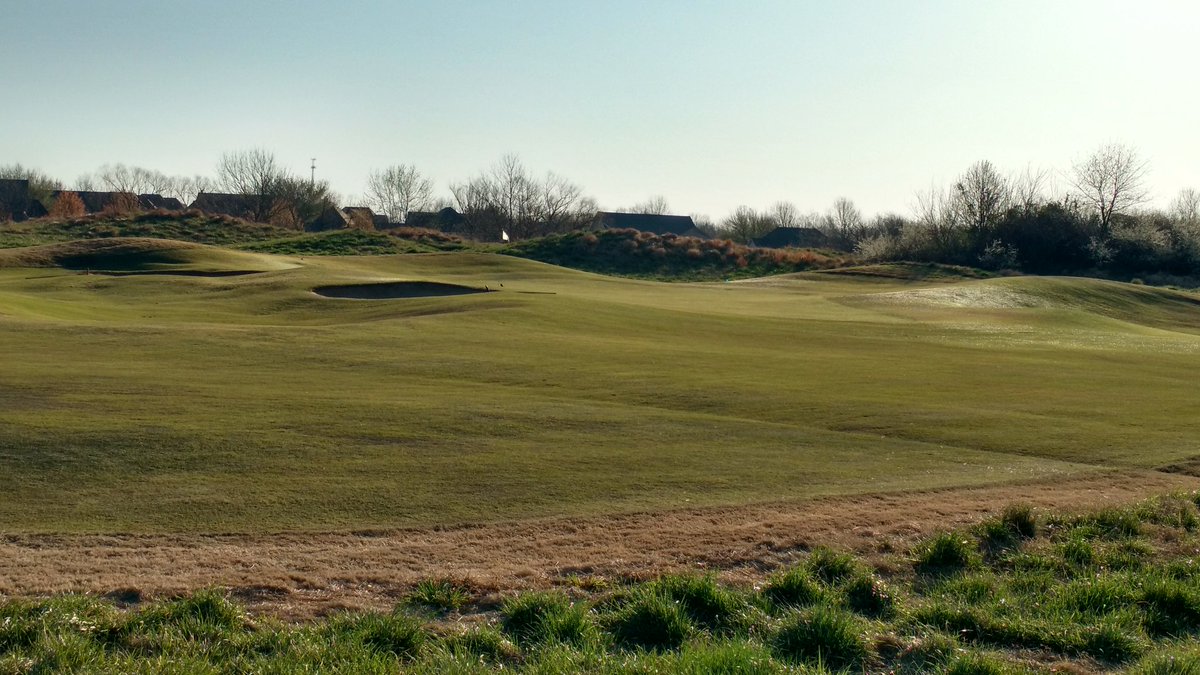