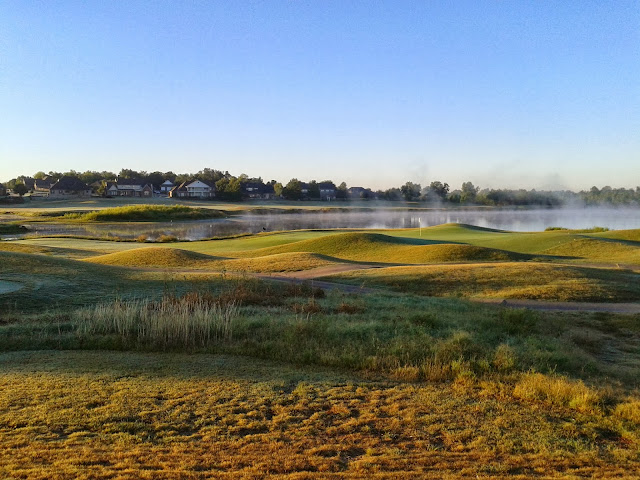 As summer fades away, and the sure signs of fall are all around us, now is the best time to be on the golf course.  The weather lately has been absolutely perfect.  This past weekend, the golf course finally received some much needed rainfall.  A storm rolled in mid-day Saturday and dropped 2 inches of rain over 4 hours.  That's 4.3 million gallons over the entire golf course.  Plenty of water to replenish soil moisture and refill our ponds.

Assessing the course this morning, I feel like the course is positioned nicely for fall.  Our Bentgrass greens are enjoying this weather and playing conditions very good right now.  The quality of our tees, fairways and surrounds will improve as well due to increased soil moisture, warm afternoons, and plenty of sunshine.  I like this time of year on our Bermuda playing surfaces because they healthy and green, but the growth is slowed down due to the cooler nights.  These night time lows in the 50's acts like a natural growth regulator.  We are currently mowing all Bermuda once per week, down from three times a week for tees, collars and surrounds.  This frees up precious labor to tackle other details that had been postponed.

It's been two weeks since greens were aerated and I am pleased with the recovery so far.  The holes have filled in and the surface is smooth.  Now that the sand is completely worked into the canopy, the grounds staff has begun lowering the height of cut down from our summer height of .150" to .120".  Currently we are .130".  We lower the height .005" after every third mowing to ensure that the turf doesn't get scalped during this process.  Greens will be verticut and dusted with topdressing sand, this week, to continue to smooth and firm the surface.

As always, if you have any questions or comments, don't hesitate to contact me at 918-272-1175 or email me at ccook@cityofowasso.com 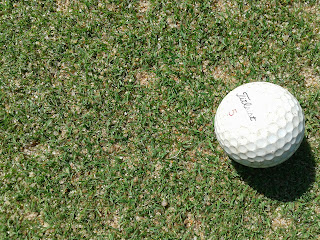 This week, staff completed the fall core aeration on all putting greens.  We originally planned to initiate this project the day after Labor Day, but the weather proved to be too hot, so it was postponed to September 9th & 10th.  Summer was stubbornly hanging around and forced us to postpone aeration yet again to this past Monday.  Despite a few showers, the front nine was completely finished by Monday evening.  Tuesday was a different story.  The staff was able to verticut, mow, aerate and clean up the cores, but due to steady rain, no sand was applied.  Wednesday morning, after the storm passed, the crew went out and began topdressing and brushing the sand into the holes.

I've written extensively, in previous posts, about the benefits of core aeration, and the process we use, so I won't go into great detail here.  For those of you who are interested, I've included a link to a previous post on core aeration here.

Although core aeration of putting greens in an inherently disruptive process, the grounds staff works very hard to ensure that putting conditions return to normal as quickly as possible.  The weather has been favorable and it looks like we are on track to heal in from the process in another 3-4 days.

As always, if you have any questions about the process of aeration, or benefits from aerating, feel free to ask.  Thank you for your patience during this time.
Posted by Chris Cook at 3:22 PM No comments: 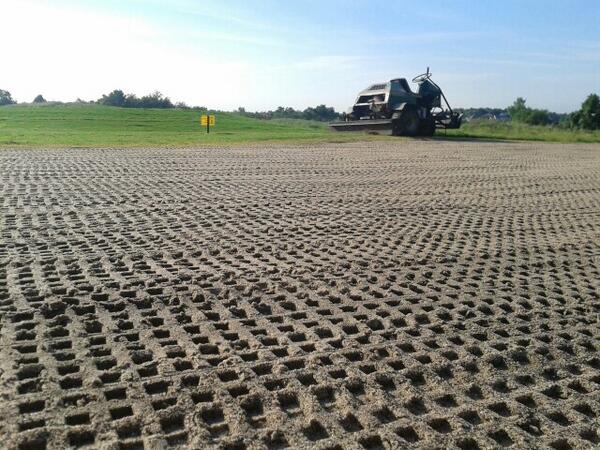 Those of you that have played recently may have noticed some construction work taking place behind the first tee box.  This work is to renovate a small putting green.  A few years ago, the sod was needed to make repairs to some areas on the golf course and was never repaired.  During the demolition phase, I discovered that a 2-3 feet of the original green had been encroached by Bermuda so we took the opportunity to enlarge the green to its original dimensions.  In the end, we added back approximately 400 square feet to the green.  This will allow us more room for hole locations.

Over the past few weeks, staff removed the old greens mix and prepped the new mix for seeding.  This morning the putting green was seeded with an improved Bentgrass variety called "Tyee."  This newer variety is the same as the Chipping green as well as #'s 12-14.  We like this new variety due to it's improved density, drought tolerance and disease resistance.  Seeding the new green today should allow for some quick germination.  By Monday, we should start to see some light green "peach fuzz" developing.  Once we get all the seedlings up, we need to be very careful to keep it moist and apply timely fertilizer applications to allow the turf to fill in rapidly.  We hope to have our first mowing in 2-3 weeks.

I will ask that as this green begins to fill in, golfers resist the temptation to putt on it so the turf has every chance to fill in by winter.  We plan on officially opening this green sometime in the spring.

If you have any questions about the process just let me know.  Thanks
Posted by Chris Cook at 1:23 PM No comments: