This week, the grounds staff finished the fairway slicing project using our Aerway solid tine machine.  This machine has blade shaped tines that fracture the soil as they enter and exit the ground.  Sometimes referred as "shattertining", this process helps to reduce compaction, incorporate oxygen into the rootzone, and improve drainage.  As you can see from the picture on the right, the slicing tines cause very little surface disruption.  Once the fairway is sliced, the turf is then mowed and any remaining debris is blown off the fairway. 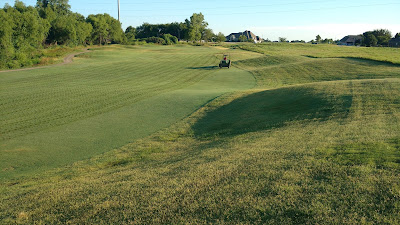 Posted by Chris Cook at 3:52 PM No comments: 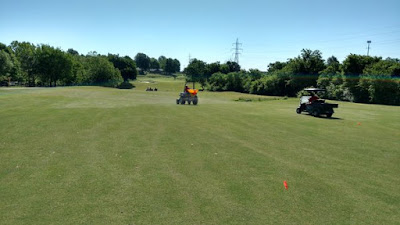 I'm a little late in writing the May course update but better late than never.  May started off nicely with good weather and just enough rain.  New seasonal employees continued to come on-board, and my assistant and I spent most of our time getting the new staff trained on various mowing and course set up jobs.

May is the first good month for growing turf in Oklahoma.  Air and soil temperatures rise and become favorable for steady growth.  The temperatures and moisture are especially ideal for the Bentgrass on our putting greens.  As the turf grows more aggressively, we begin to implement cultural practices such as: verticutting, topdressing and grooming.  These practices remove troublesome thatch and improve putting quality.  The warmer temperatures also mean that the Bermuda has fully woken up and needs it's first big meal of the season.  The grounds staff went out in mid-May with a course wide granular fertilizer application.  This fertilizer allowed the Bermuda to fully thicken up and quickly improved the overall quality of the playing surfaces.  Each month, throughout the growing season, the Bermuda will be fed with various amounts of fertilizer to sustain quality turf.
The temperatures and consistent rainfall, during May, are ideal for the Tall Fescue, in our native areas, and this year was no exception.  As you can see from the picture of #8 below, it has been a great year thus far for our native areas.  These areas will be cut during June to discourage summer annual, and woody weeds, such as sumac, thistle, ragweed, and various trees.
The latter half of May was very wet.  Multiple rainstorms kept the soil saturated and the grounds staff was unable to keep up with our mowing schedule.  For almost two weeks, the fairways were unable to be cut.  However, the staff stayed busy, during the stormy weather by repairing bunkers, edging sprinkler heads, edging drainage basins, and string trimming throughout the golf course.  The last few days of May were dry and the staff, through their hard work and diligence, was able to catch up on mowing just in time for Memorial Day weekend.

Posted by Chris Cook at 2:25 PM No comments: 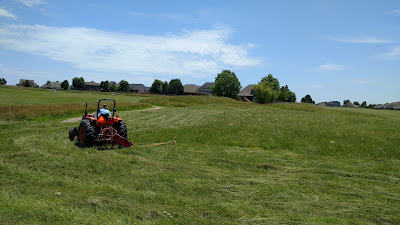 Bailey Ranch Golf Club has over 50 acres of low maintenance, pasture areas that are designed to create a links aesthetic, penalize errant shots, and reduce operational costs.  These native areas cost far less to maintain than the in-play rough, which requires frequent mowing, irrigation, herbicide treatments and fertilizer.  The native areas are mowed twice a year typically around June 1st and October 1st.  This timing favors the Tall Fescue, which over the past five or six years has become the dominant grass.  Allowing the Fescue to dominate creates a more consistent stand of grass and presents a nice links aesthetic.

Posted by Chris Cook at 9:02 AM No comments: 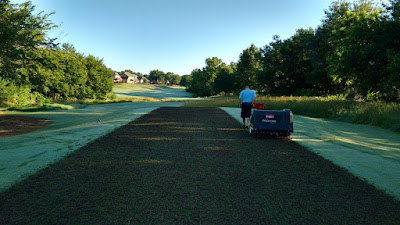 This week, the staff is core aerating all tees and collars.  This process is vital to the long-term success and sustainability of the turf.  Aeration loosens the soil which encourages more vigorous rooting and a healthier plant.  We do not close the course during this process, so inevitably there will be debris on some of the tees during your round.  Rest assured that the staff is working hard to clean up the debris as quickly as possible.  We plan on having the entire project finished by Tuesday afternoon.  We appreciate your patience. 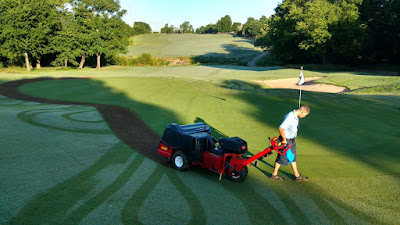 Posted by Chris Cook at 9:07 AM No comments: