Below is an article written by Charles "Bud" White, the Mid-Continent Director for the USGA. In this article, it explains all of the negatives associated with the decrease in putting surface heights during the summer stress time periods. It also promotes increasing the putting surface height just slightly going into these time periods,as it can prove to be beneficial as it relates to managing bentgrass in the southern transition zones of the United States.

THE  CUTTING HEIGHT  DILEMMA
Finding the right balance.
BY CHARLES “BUD” WHITE
In the last few years, there has been an ever-increasing demand for faster putting green speeds on golf courses throughout the . Brought on in large part by “TV golf” or tournament golf, the general public now wants to play under the same conditions as the professionals.
During my USGA Turf Advisory Service visits, I am often informed of how golfers played on 12' or 13' Stimpmeter® speeds during an event and loved it. The fact is, these golfers were probably playing on greens that may have been about 11' on the Stimpmeter,® but they thought or were told that greens were at speeds of 13'.
Bottom line, the average golfer would three-putt or four-putt with those speeds. This need for speed has brought on a new set of problems because superintendents are reducing cutting heights to achieve these increased speeds.
In the last 10 to 12 years, we have seen  a shift in putting green maintenance, where the average cutting height at many courses has gone from 5/32" (0.155) to less than 1/8" (0.125). Some courses are even at the 0.085" to 0.090" range. At these extreme heights, there is virtually no leaf area left, and the turf is in significant physiological stress all the time.
Root development and turf health are directly related to cutting height — the lower the cutting height, the less root development. The shift in putting green management causes undue and often unbearable stress and strain on the turf.
Literally, it is management on a razor’s edge, and it is a major reason why we have a large increase in disease and fan use on bentgrass greens in the South over the last several years. Golfers often tell me that 15 years ago the greens were just fine. Now these greens can’t survive without fans, and golfers want to know why. Quite simply, the decrease in cutting height has caused increased stress on the grass.
I refer you to a Green Section Record article authored by Dr. Bingru Huang, Burning the Candle at Both Ends, which clearly points out the dramatic difference in turf health by simply raising the cutting height 1/32" during the summer stress periods. This basic, grass-roots research summarizes most of the turf health problems we are experiencing and where this lowered cutting height on greens has led us as an industry. In addition to increased use of fans, we have also seen a greater negative impact from tree shade and root com- petition.
Shade imposes stress on turf at lower cutting heights because of less turf leaf area and a reduced ability to photosynthesize in reduced-light environments. Even concentrated foot traffic, such as the ingress and egress points on greens, has a much greater impact due to this reduction in leaf area and turf health. A slight raise in cutting heights to moderate levels would still maintain greens at a very acceptable level of speed and quality during the times of summer stress yet would minimize most problems and eliminate many.
Superintendents are using alternative measures, such as alternating mowing and rolling during the summer to reduce stress. In my experience, there is no reason that a golfer at any level cannot enjoy an average daily speed of 9' to 10' during the summer stress and still have a challenging game. If a golfer insists he must have 11' or more on an average day to have a quality putting green, then he or she has missed the whole purpose of the game and is not concerned about course health whatsoever.
The cutting height dilemma on  golf courses has gone way past the reality mark and is creating impossible growing conditions for many courses. Golf courses cutting below 1/10" have found that raising the cutting heights above this level can actually produce greater putting quality and speed by utilizing other grooming techniques, because there is more leaf tissue to work with during the grooming process. There is definitely a point of diminishing returns once the cutting height drops below 1/8". With luck, golfers can be educated to understand what these excessively low cutting heights do to the turfgrass, and then they may be more realistic in their demands. The summer of 2010 taught many a lesson the hard way. Reasonable cutting heights, when balanced with other grooming techniques, will not reduce the quality of greens, can actually enhance the golfing experience, and can do so without putting speed reductions.
BUD WHITE is the director of the Green
Section’s Mid-Continent Region.
Posted by Chris Cook at 3:44 PM No comments: 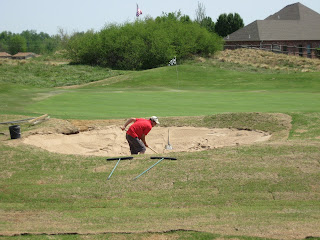 Earlier this week the maintenance staff finished the bunker renovation on #8.  The new drainage was installed as well as the new bunker sand.  This area will remain ground under repair for a week, or so, until the sod is fully established.  Once the sod is established, it will be mowed and the bunker complex can be opened.
Posted by Chris Cook at 12:08 PM No comments:

The turf team has been hard at work since Monday aerating the greens.  We completed the front nine greens Monday and the back nine greens Tuesday.  The last two days have been spent cleaning off excess sand and  rolling greens to make sure the the putting surface is smooth and consistent.
Although golfers seem to understand that greens aeration is necessary, we still want to get the greens back to their original condition as soon as possible.  For those that aren't sure exactly what aeration is or what the process looks like, I've included some pictures to help explain the process.
To start the process we double verticut (de-thatch) the greens and blow off the debris.  Then we mow them to clean them up further.  Once this is done, we begin pulling cores with the aerifier. 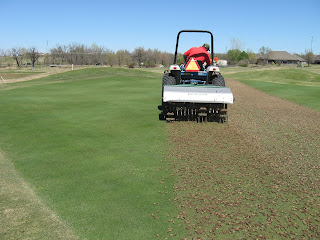 The aerifier pulls cores at a specific width and spacing to remove as much organic matter as possible. 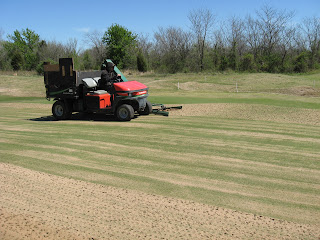 Once the cores are pulled, the harvester comes through and picks them up.  Any remaining material is then blown off to get the green ready for topdressing. 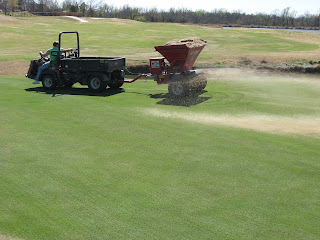 The topdressing sand is broadcast onto the green at a specific thickness to be sure that enough sand is there to fill all the holes. 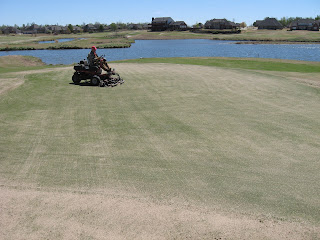 After the topdresser is finished, and the sand is dry, a mower fitted with brooms brushes the sand into the holes and removes any excess off the green. 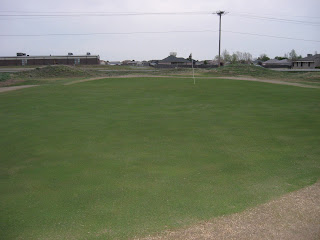 Here are a few pictures of the finished product.  Our goal is to make it so that only when you walk onto the green can you tell that they've been core aerated. 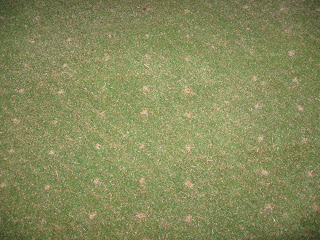 If you have any further questions or would like to learn more about the process please feel free to contact me.
Posted by Chris Cook at 7:50 AM No comments: