A month ago, during some winter weather, the staff spent a few days repurposing our old spray rig into a service vehicle for Dan Welborn, our equipment manager.

I've wanted our equipment manager to have a service vehicle for several years but never felt we had a viable option until recently.  A few years ago, we bought a new John Deere spray rig but decided to keep the older Cushman spray rig so we could use it as needed.  Over the past few years, we haven't used it nearly as much as we anticipated and it has sat for over a year collecting dust in our chemical storage room due to costly repairs to the spray module that would be needed.  I decided that it wouldn't make any sense to spend over $3,000 to get it back into condition as a spray rig.  Although the spray module was a mess, the vehicle was still in good mechanical shape.  The staff disassembled the module and we took stock of the condition of the vehicle and decided to proceed with the project.  The picture above shows the vehicle with the spray tank and booms removed. 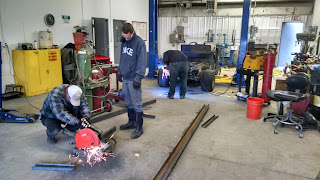 The most involved part of the project was fabricating the flatbed and attaching it to the frame of the utility vehicle.  As you can see from the pictures to the right, stock steel was purchased and each piece had to be custom made to fit.  The whole process took two days.  Once the flatbed was welded together, it was primed and painted. 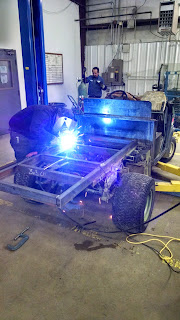 The last step was to bolt all the accessories to the flatbed.  The purpose of the vehicle is to allow the equipment manager to quickly react to an issue on the golf course quickly so that equipment downtime is minimal.  Service vehicles will be outfitted differently at each golf course due to different demands.  Each accessory chosen reflects the common problems that Dan will face throughout the season.  A generator to supply power for various hand tools, a compressor for tire work, a tool box full of various hand tools, storage for tire patch kits and other misc. supplies, a vise for various tasks, and a winch mounted under the back for helping machinery when they get stuck.  As you can see from the final picture at the bottom of the post, there is still some space available along the passenger side for additional storage box and some undermount boxes behind the rear wheels.  These will be purchased next year when funding is available.

The staff did a great job taking an old machine that wasn't in use any more and making it useful again.  We are excited to have the vehicle in our fleet and expect it to be very useful throughout the year.

Posted by Chris Cook at 8:15 AM No comments: 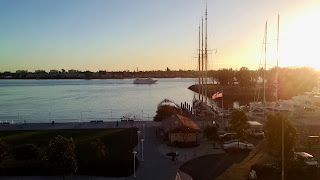 I'm a little late in writing this post, but a few weeks ago, Michael, my assistant, and I were fortunate to be able to attend the Golf Industry Show in San Diego, California.  The GIS is the annual Golf Course Superintendent's Association of America trade show and educational conference.

The Golf Industry Show is the place to network with industry peers across the country and the world.  The numerous educational seminars offer a wide variety of topics for superintendents to sharpen their skills and the trade show offers all the latest and greatest the manufacturers and suppliers have to offer to the industry.  It never fails in the few short days that I get to attend, I come away with something new to offer our club.  Whether it's new techniques to improve course conditions, or a new way to complete an in-house project more effectively, meeting new friends or catching up with old friends, the GIS offers many ways to come home invigorated and mentally ready to give the upcoming season my best effort.

Posted by Chris Cook at 7:48 AM No comments:

One of the biggest reasons I got into the golf business is to work outside and enjoy nature.  I firmly believe golf courses are an integral part of the environment and are often the only place where wildlife can live as communities continue to grow.  As the golf course superintendent at Bailey Ranch Golf Club, I have a direct impact on our facilities environmental footprint, and I take that responsibility very seriously.  There are numerous ways we, as a facility, work towards environmental stewardship such as: water conservation, soil testing, scouting for disease and pests, reducing maintained acreage, grass buffers along pond banks to improve water quality and encouraging wildlife habitat. 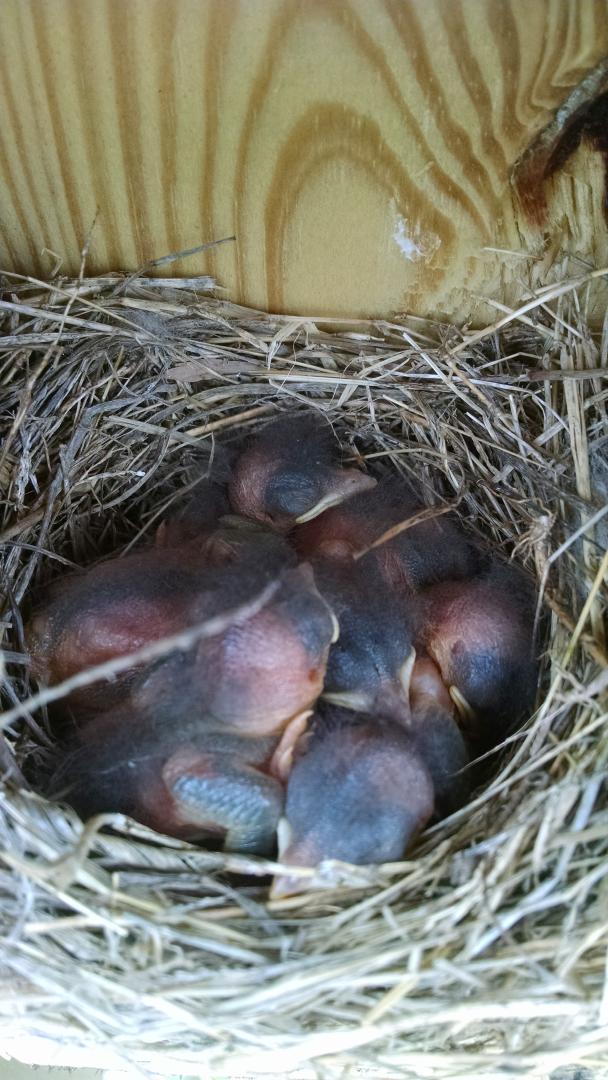 Wildlife habitat is one of the best ways a golf course can benefit the environment.  With this in mind, one of my big initiatives last year was to begin a bluebird nest box program.  With the help of the Oklahoma Bluebird Society and the Oklahoma Department of Wildlife Conservation, we constructed and placed 12 nest boxes throughout the golf course.  We then monitored the boxes throughout the year so we could track any progress.  At the end of year, we submitted our results to Oklahoma Department of Wildlife for their Bluebird Nest Box Survey.  We just got their final report and it seems that Bailey Ranch Golf Club was the only entity, public or private, that reported any results in Tulsa County.  Although we only had three nests and 24 fledglings, I'm pleased with the progress we made in our first season. As the program continues to grow, our goal is to have nests in every box each season, and eventually expand the program into other areas throughout the property. 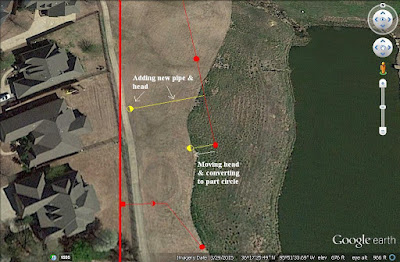 Posted by Chris Cook at 3:05 PM No comments: 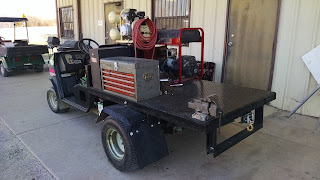