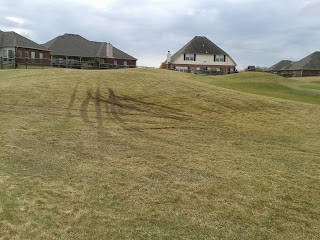 Managing cart traffic during wet weather is a year-round task but it becomes especially important this time of year.  Lower evaporation rates and reduced usage by the dormant turf prolongs the time it takes for excess water leave the soil.  This means that after a rain, the ground stays wet for much longer than expected.  Last week we received almost 2 inches of rain on Tuesday.  During the summer we would have likely been back off the paths the next day, however, last week, the grounds department made the decision to keep carts on paths through Thursday.  We had several golfers take their carts off paths and the tracks they created are still visible.  The picture on the right is front left of #11 green.  There are places all over the golf course that look like this.  We ask for your cooperation when we are supposed to be on paths so that mud tracks like these can be prevented.  The grounds department assesses the course conditions
every day and will make changes to the cart policy as needed.  Thank you.
Posted by Chris Cook at 12:05 PM