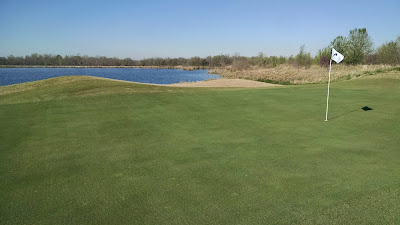 March has always been a transition month in this part of the country.  Some years it can be warm and give you an early start to the season.  Other years, it can be cold and just another month of winter.  Most often it's a little bit of both.  This year March started off mild and had all of us thinking we would get an early start to spring.  Leading up to, and during, core aeration in mid-March, the temperature was above average and had all the short-cut turf waking up rather quickly.  Since then, we've had a handful of frosts that have effectively shut down any additional green up.  We've actually lost color since mid-March.  This is the most frustrating part of spring in this part of the country.  You get excited about greening up and getting a good start to the growing season, and then winter reminds you that it's still early and not done yet.

Aside from the weather, the staff was very busy,
not only finishing up our winter to-do list but, working on preparing the course for the season.  Core aeration on greens, stump grinding, course wide pre-emergent application, topdressing divots on tees, and mowing all surfaces. March is also when our seasonal staff begins to return and so much of our time was spent training them on course setup and other tasks.

With March behind us, and much of the critical spring work is completed, we can begin to settle into our maintenance programs and groom the course as it continues to wake up from winter.  Over the next 30 days, we will continue to acquire/train staff, increase mowing schedules, and ramp up our cultural programs (venting, spiking, verticutting, topdressing).
Posted by Chris Cook at 8:00 AM