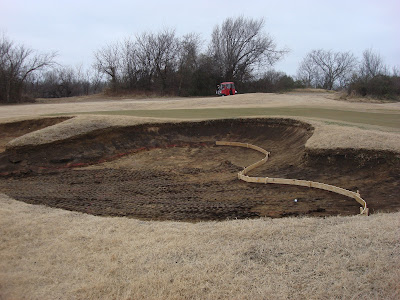 The maintenance crew began work on the bunker on #14 today.  All of the old sand has been removed as well as the old drain pipe.  The original bunker edge was uncovered during the excavation process so we decided to use this edge to "reset" the bunker to it's original proportions.  The maintenance staff has also begun installing the forms used to create the new sod edge.  Soil will be back filled behind the forms and graded to the grass all the way around the bunker.  This effectively reduces the slope and decreases the likelihood of sand erosion in the future.
Posted by Chris Cook at 4:11 PM